Stefanie Heublein and Kamil Pavelka have managed the Shared Cities consortium. How did they make such a large international network of people collaborate? What were their personal highlights during the project? Find the answers in the interview with Stefanie Heublein, Project Manager of Shared Cities: Creative Momentum and Kamil Pavelka, Co-Developer of the project at the Goethe-Institut Prague, Czech Republic. 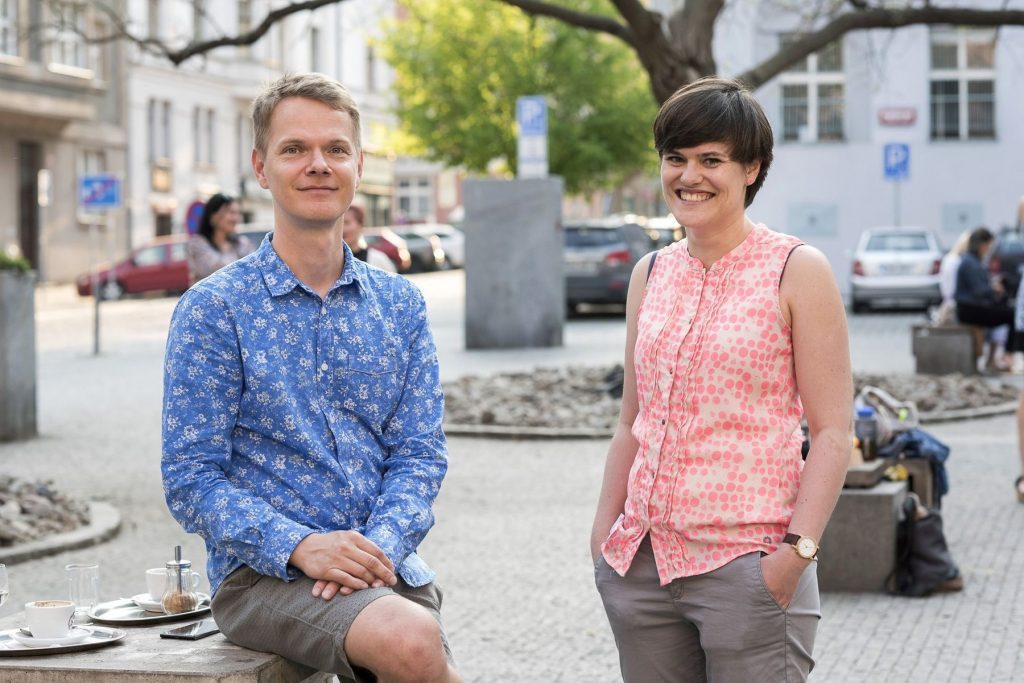 “Our network of partners, who are now recognized as experts in their countries, has created an assemblage of inspirational methods for cities.”

For four years, you have managed the Shared Cities consortium consisting of eleven partner organizations based in six different countries. What would you recommend to organizations who are about to embark on a similar project journey?

Stefanie: At the beginning of the project, I would focus on fostering communication within the network, starting with an experimental phase in which partners would get to know each other and agree on clear shared goals – in our case this would have been an exchange on what we understand under sharing – is it rather the shared economy or shared governance?

Kamil: To any partnership I would wish open communication, clear goals and taking the time to clarify the aim of the project – a clear vision gives everybody more creative freedom. 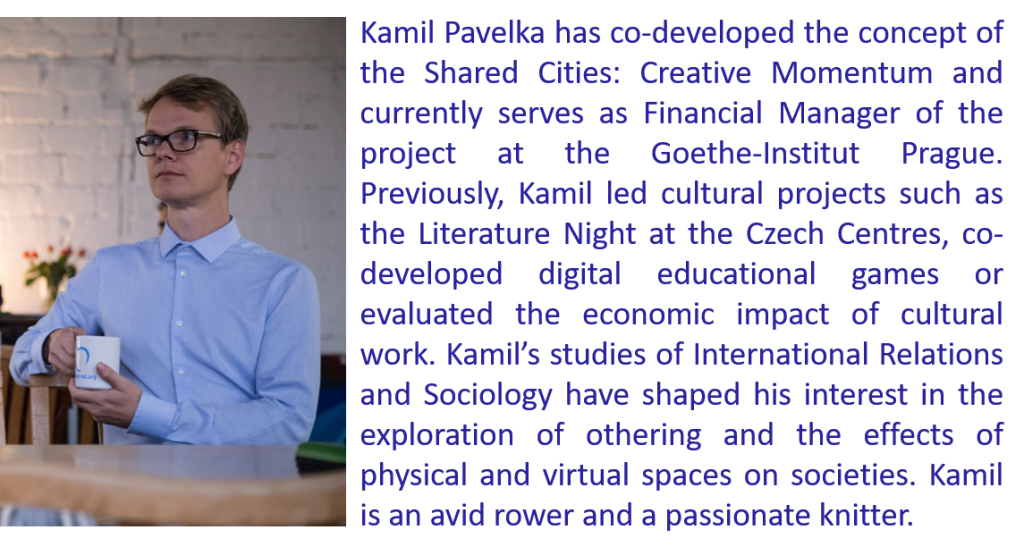 How did you make such a large international network of people collaborate?

Stefanie: Personal meetings worked, like our annual partner meeting or the big events we organized – BINA festival in Belgrade, reSITE conference in Prague or Ideas Yards in Prague where we invited our partners to present their results and matched them with local organizations working on similar topics. Also, joint projects on specific topics between several partners encouraged strong collaboration within the project. Finally, external communication via our Shared Cities website and Facebook group supported our cooperation

Kamil: I agree with Stefanie, what kept the cooperation running were meetings in person. From my perspective, technical tools and modern methods of communication like digital conferences lacked real connection.

In 2017, the Goethe-Institut in Prague opened the first library of things in the Czech Republic.  It sparked a lot of interest – what is so intruiging about borrowing things?

Kamil: The scarcity of resources. You don’t have to buy things if you don’t use them every day. People have small flats or don’t have the money to buy expensive tools. Another aspect is that people are becoming more considerate of the environment as we started to realize that the resources on our planet are not endless. Recently, our library of things inspired a group of people in Israel who run a library of literary works for refugees to start lending out things as well.

Stefanie: We are also rethinking of how we use resources – I don’t need to own, I’m happy to share in an idealistic, not materialistic way. In 2015, when we wrote the project, shared economy was hip, people were excited about Airbnb and Uber. This has changed drastically in the last years. Now, we have a critical discussion about exactly these suppliers, their working conditions and their negative effects on cities. Lately, the discourse has changed again in the light of environmental challenges. 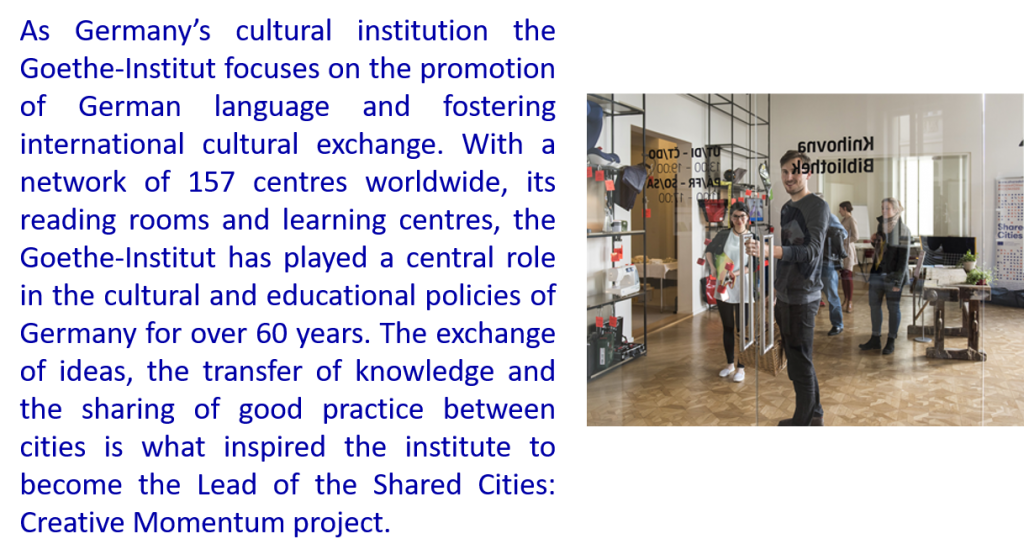 Shared Cities’ mission was to make cities a better place to live. Have you succeeded?

Stefanie: Shared Cities did have this kind of impact. ABA in Belgrade brought a group of people together who transformed a square and created a community area in between pre-fab houses. Our Bratislava partner Aliancia Stará Tržnica made the SNP square in front of the Old Market Hall more attractive.

Kamil: Our project was successful – we wanted to induce positive change in the thinking of people and in the way policy makers get involved in participatory processes. Thanks to our project many „aha” moments happened in the heads of policy makers as we showed innovative ways and tested new methods. Our network of partners, who are now recognized as experts in their countries, has created an assemblage of inspirational methods for cities.

What were your personal highlights of Shared Cities?

Stefanie: It was when our partners came together, especially during the Shared Cities Finale in October. Another highlight is the Atlas, a publication mapping the phenomenon of sharing in the region of Central Eastern Europe.

Kamil: I agree, the Atlas is one of our best outcomes – curated by Helena Doudová it is exactly what was needed in the region. Also great were the democratic formats of our project meetings – like discussions in the form of a world café engaging the audience. 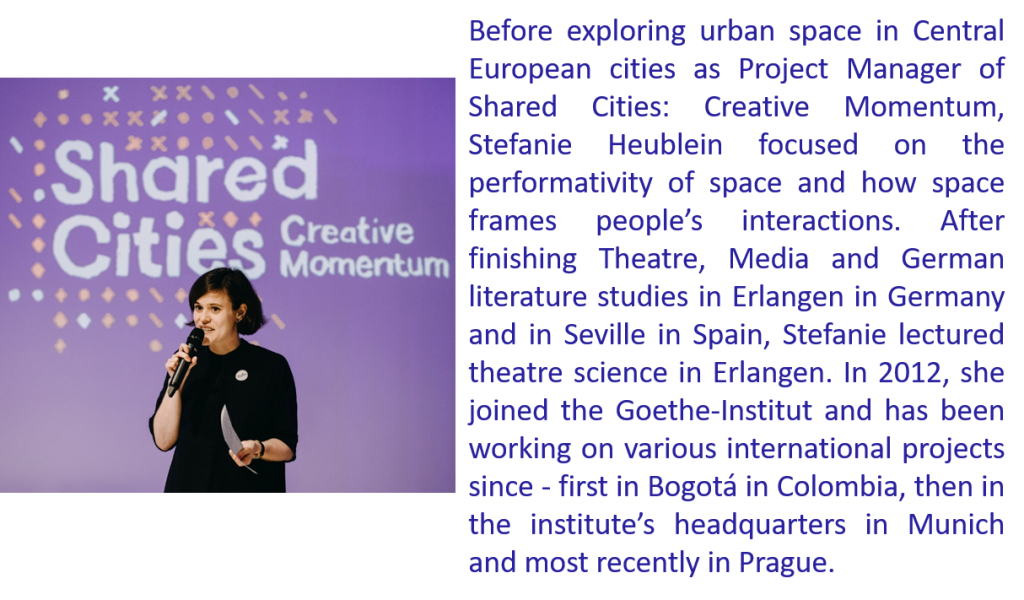 During Shared Cities, you were both based in Prague. Is the public space in Prague any different from other European cities?

Stefanie: On the one hand, Prague has an excellent and affordable public transport. On the other hand, I experience public space in the city as economized, often used for e.g. restaurants to make money.

Kamil: One aspect is the shape of public space – throughout our project, I have noticed the change of public furniture or the pathways for pedestrians. As for the use of public space, during Shared Cities we have induced local changes which now serve as best practices. For example, the gender dimension of public space has got into the mindsets of policy makers thanks to our partners. There is a big difference to walk through a public space as a healthy 18-year-old man as opposed to an elderly woman or a mother with a child. Another topic is the commercialization of prominent public space that Stefanie mentioned – not just in Prague but in many cities throughout Central and Eastern Europe – if somebody hit me on the head in Budapest and I woke up I wouldn’t have an idea where I was.

What do you think the main trends of urban sharing will be in the near future?

Kamil: Looking back in time, my idea of sharing used to be very naive – as a science fiction image where everybody uses what they want and is very considerate. In the future, sharing will still be driven by the scarcity of resources. Now is a good time to adjust our mindsets.

Stefanie: In the last issue of the Cities Magazine, our Warsaw partners explored how sharing in Central and Eastern European cities will develop. One big trend is co-living and more-generational houses shared by people of different ages or backgrounds. Or ideas of building something together like Baugruppe or sharing energy – the mindset in the future might change towards sharing not as an option but rather as a necessity. People have an instinctive urge to own something which goes against the idea of sharing, so there is a lot of work of ahead. In Leona Lynen’s words: “Change the system!” – I mean not in a revolutionary way but by rationally evaluating our options.