“It is important for us and for SCCM project partners to show that culture and cultural projects not only ‘consume’ finances, but that they have a very important economic impact …”

Ivana: In addition to participating in different project events and activities, we as the Czech Centres are being involved as a member of the Core Team, project advisory and management body, and our main task within the project is the implementation of two project activities – the Iconic Ruins? research exhibition and an economic impact evaluation of the project.

The two activities that you realize in the project appear to be quite different in their focus, one being an exhibition, the other being research and analysis. How did the Czech Centres find themselves in these activities?

Ivana: The production and organization of cultural and artistic exhibitions lies at the heart of the mission of the Czech Centers. We organize tens to hundreds of them annually in our foreign branches – 25 Czech Centers that are spread all over the world and also in the Czech Republic. The exhibition was our most natural contribution to the project.

As far as economic evaluation is concerned, like every institution we are interested in understanding the impact of what we do. Although the profit is not primary to us, it is still important for us to be able to evaluate the secondary impacts on the economy of all our activities. The results also help us refine our strategy, goals and priorities. And I think that applies to the project as a whole. All partners are interested in making the project a real asset not only for us as partners but also for the countries in which the project is implemented. Within our organization, we have been involved in the evaluation of our performance for a long time, so we were glad to accept this task also within the project. 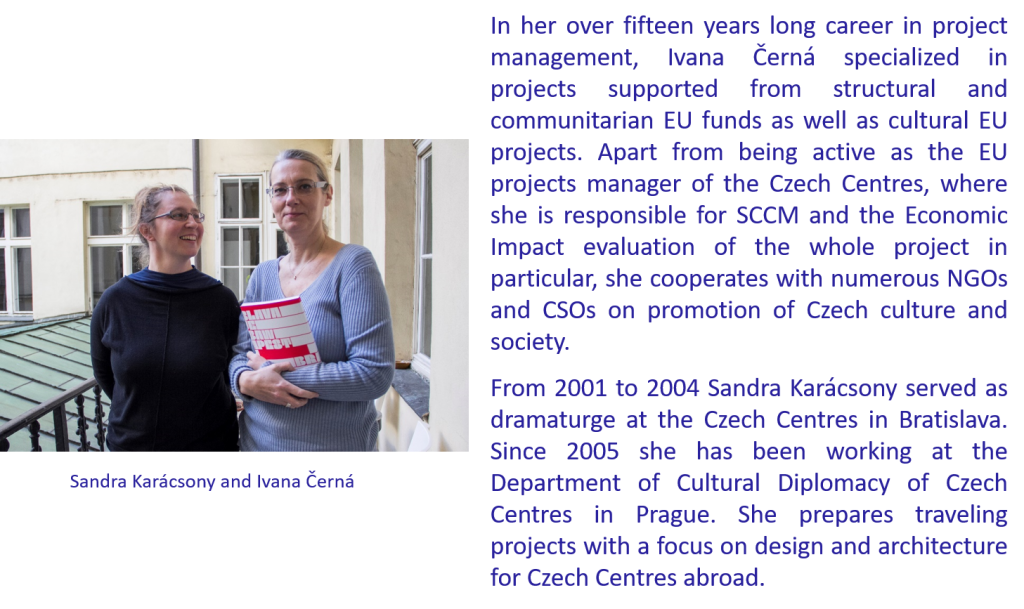 In cultural projects this approach of exploring the impacts via a statistical input-output analysis is rather innovative. Could you shortly explain what is it about and what are the benefits of having such analysis?

Ivana: The aim of the economic impact evaluation study is to quantify the impacts of the project on four countries and their economies (the Czech Republic, Hungary, Poland and Serbia) and secondly, to assess the overall impacts on the EU economy using the methodology of calculation of the economic impacts including the multiplication effect of the supply chains, the local input-output models and tax rates for each country. Two categories of input data are observed, the budget of the project and the related spending of the visitors and participants involved in the project activities. The analysis then shows us the total spending induced by the SCCM project within given countries and the resulting increase of the total output of the economies.

It is important for us and for SCCM project partners to show that culture and cultural projects not only “consume” finances, but that they have a very important economic impact for the countries that implement them and invest in them. For example, in all countries analyzed, the public investment (EU grant) was very well used to enhance culture, urbanism and quality of life in the cities. And thanks to partners’ activities and their public events’ visitors, the grant was amplified and returned back to public budgets in the form of taxes and other payments.

Returning to the topic of the exhibition Iconic Ruins? Post-war Socialist Architecture in the Visegrad Countries, which took place in Prague in April and May 2019: What did you find most interesting on this topic and how did you proceed in creating its concept?

Sandra: Initially, we had a more general concept. As the definition of the term “Iconic Ruins” evolved as part of the work of our project partner – the Academy of Fine Arts and Design in Bratislava (AFAD) – we began to refine this concept and developed it into the set of examples of post-war architecture.

The starting point was AFAD’s definition of the term “Iconic Ruin”: a socialist cultural, business, sports or other “palace” with exceptional architecture in an exceptional location in the city with generously conceived public space. At present, such buildings are often in a problematic state, both in terms of their structural integrity and program content. The revitalization costs are a critical aspect because of their monumentality and, in many cases, unquestionable architectural quality.

We followed the definition in the context of the four Visegrád countries (Czech Republic, Hungary, Poland and Slovakia), where the concept of sharing played a big role. We wondered what we share, what we have in common and what we are now dealing with in case of the architectural heritage. We also categorized the architecture of the socialist period systematically into more specific typologies and three “time slots” which gave us a “palpable” overview of the architecture of the whole period. The result is a representative exhibition of postwar socialist architecture in the V4 countries. 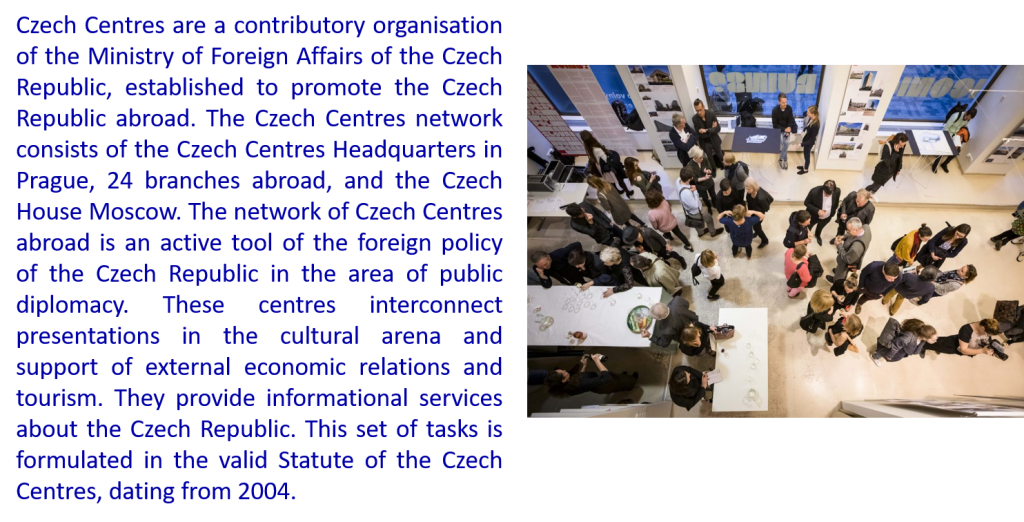 What is so interesting about Iconic Ruins, and why are they so special for this area?

Sandra: Post-war architecture in the former socialist countries has recently become a closely watched topic. For many years, the public perceived it with embarrassment, against the background of often dismal personal memories and human fates influenced by the communist regime. Recent scholarly studies and awareness-raising activities, however, reveal the diverse range of forms that architecture has assumed at the time, as well as the parallel development that anchors the former Eastern bloc in the broader context of world architecture history. Iconic Ruins? exhibition focuses on politically exposed public investments and seeks links or clashes between the ambitions of power and the creative thinking of architects. The rapid disappearance of the “architecture of socialism” in recent years, due to radical rebuilding and demolition, has led to an unprecedented commitment of the professional community and academia.

How did you choose the curators?

Sandra: We tried to open a discussion on the topic of “risks to late modernism in European architecture” among experts. Eventually, four curators participated in the preparation of the exhibition: Petr Vorlík (Czech Republic), Henrieta Moravčíková (Slovakia), Anna Cymmer (Poland) and Ábel Mészáros (Hungary), all experts on this subject who published a number of professional publications. For us it was also important that they were working according to the Docomomo International methodology, which seemed suitable for this project. And of course, we worked very closely with Vit Halada and Ján Studený from the AFAD in Bratislava.

How does the future of the Iconic Ruins? exhibition look like and is there a particular interest in the topic of Iconic Ruins in other countries?

Sandra: In the countries of former Eastern Bloc, such as Poland, Bulgaria, Romania, etc., this subject is perceived as current, interesting, and also sensitive. So far the exhibition was very well received by both domestic and foreign audiences. People are becoming more and more interested in this architecture and in its protection. It is now widely considered to be part of the cultural heritage and should be treated as such. Our aim was to open a discussion of how to work with this architecture, how to preserve it, and what should be its program content, as well as to compare the approach and openness of the general public to the issues of this architecture in the V4 countries.

As for the exhibition itself, by the end of the year 2019 we will present it in the Czech Centres network in Hungary (Budapest), Poland (Warsaw), Germany (Berlin), then in Slovakia (Košice).