Public space, in particular in cities, is an important backdrop for gatherings and everyday social life. The organization of public space and the objects in it, most notably street furniture such as benches, bus stop shelters, advertising pollards, and public restrooms, determine who will use them and help create and confirm norms about which people should use publioc space and how. In this essay, two aspects of the norming function of street furniture will be discussed: its provision by various entities (public authorities, private contractors and developers) and its physical structure and arrangement. 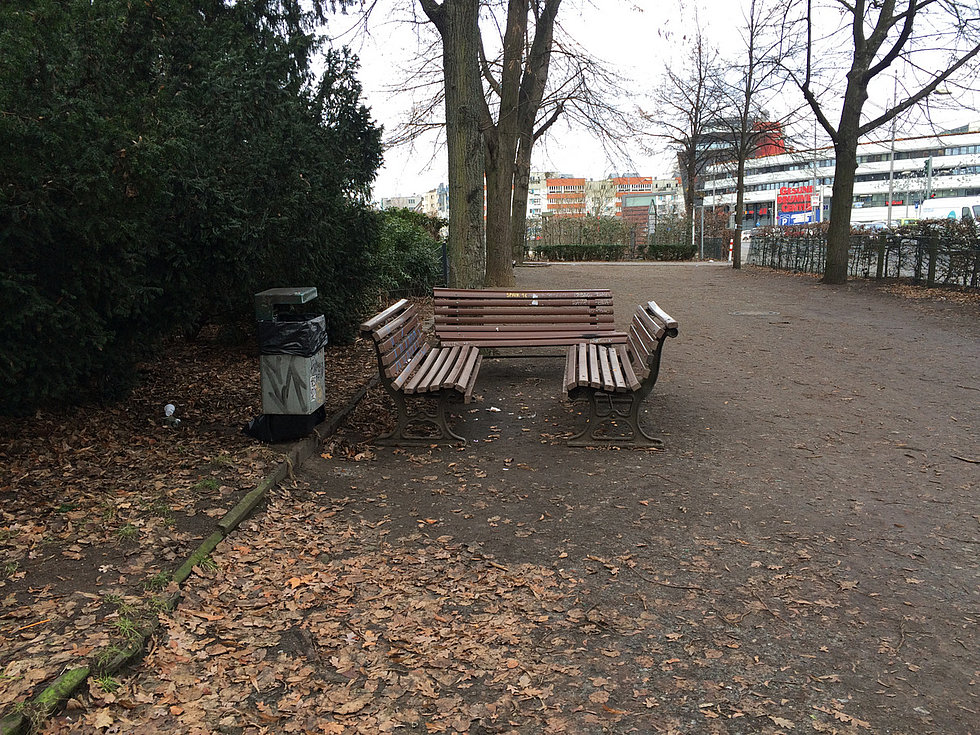 The author argues that when street furniture is provided to urban public space without its input, its structures create a ubiquitous backdrop for everyday life. This enforces official narratives about how and by whom public space is supposed to be used. A critical view to urban street furniture should therefore ask who gets to use, to change and to adapt public space and what other voices could be involved in the decision process surrounding which structures are built and how?

Public space, in particular in cities, serves several important social and political functions. It can be a space for gatherings from political protests to art festivals to neighborhood concerts. It also serves an important role in communication and our everyday social life, from groups of friends grilling in public parks to couples sitting on a bridge abutment watching the sun go down. How this space is physically structured helps to determine which uses are possible, but also helps to create and confirm norms about how we should move through and use space and which persons or groups are welcome. One central aspect of the organization and physical structure of public space is street furniture. Street furniture includes, but is not limited to, benches, bus stop shelters, trash cans and public toilets.

In this essay, two aspects of street furniture’s norming function will be discussed: its provision by various entities (public authorities, private contractors and developers) and its physical structure and arrangement.

Street furniture is about the passive consumption of urban space, thus the provision of street furniture defines how we can consume public space. Typically, street furniture provision occurs in a top-down (supply-driven) fashion. Three broad groups of providers exist: public authorities (funded by tax revenue), third-party contractors (funded typically by a combination of public budget allocation and advertising revenue), and developers in the context of housing and “master-planning” development (typically understood as part of “landscaping” or “public space development”). 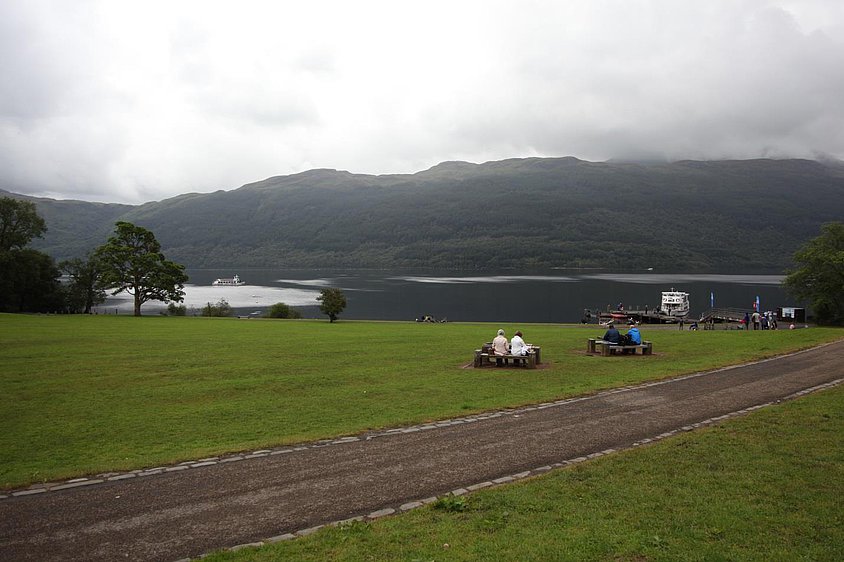 Figure 1. Picnickers at Loch Lomond in Scotland adhere to the structures provided to them © Mary Dellenbaugh 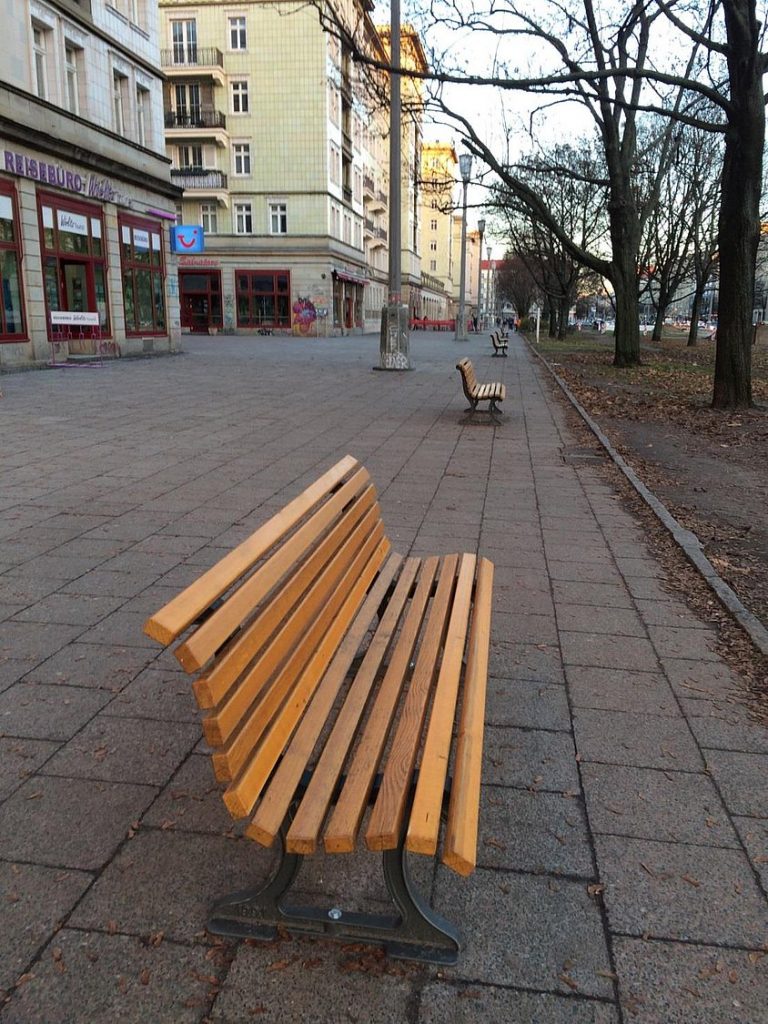 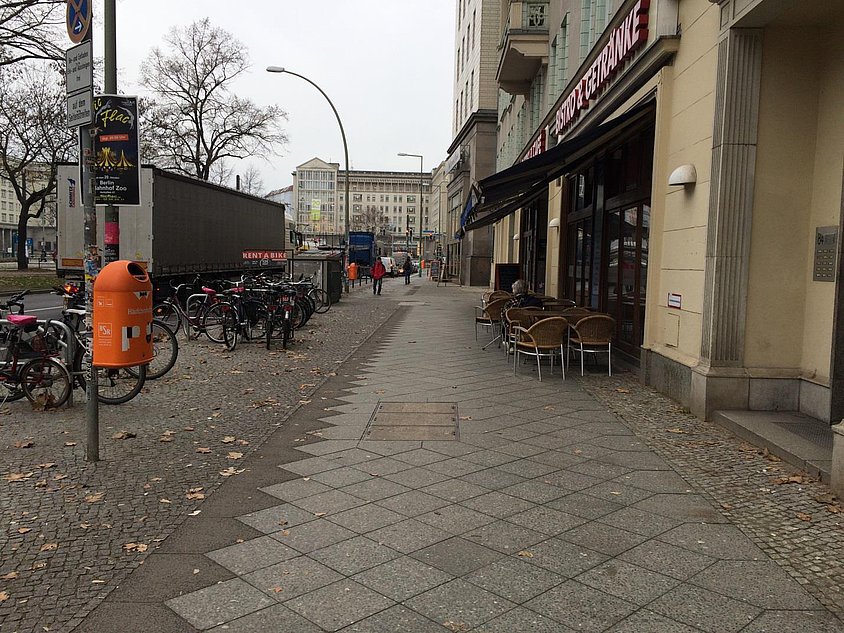 Figure 3. Just a few hundred meters away, an elderly woman with crutches sits in privately-provided seating because no bench is available © Mary Dellenbaugh

Public space is strongly regulated by public authorities, though this control is often subtle. The provision of street furniture creates a situation in which the responsibility for organizing and designing public space is taken out of the public’s hands. This situation lets people think that they are not permitted to act in this space while structuring the space in a way that conforms to accepted social norms (i.e. it’s acceptable to construct benches with middle bars to prevent persons from sleeping on them because homelessness is a normatively undesirable feature of metropolitan life). This process is inherently exclusionary; “one of the consistent ways to limit the economic and political rights of groups has been to constrain social reproduction by limiting access to space.”[1] Provided structures also impose a form of “discipline,”[2] allowing certain uses in certain places (and also conversely implicitly forbidding them in others). Public authorities enforce this discipline, for example through selective policing.[3] Thus provision of street furniture by public authorities leads to the establishment and confirmation of a) social norms (i.e. “the way things are done”) and b) concepts about who is permitted to use public space in which ways. 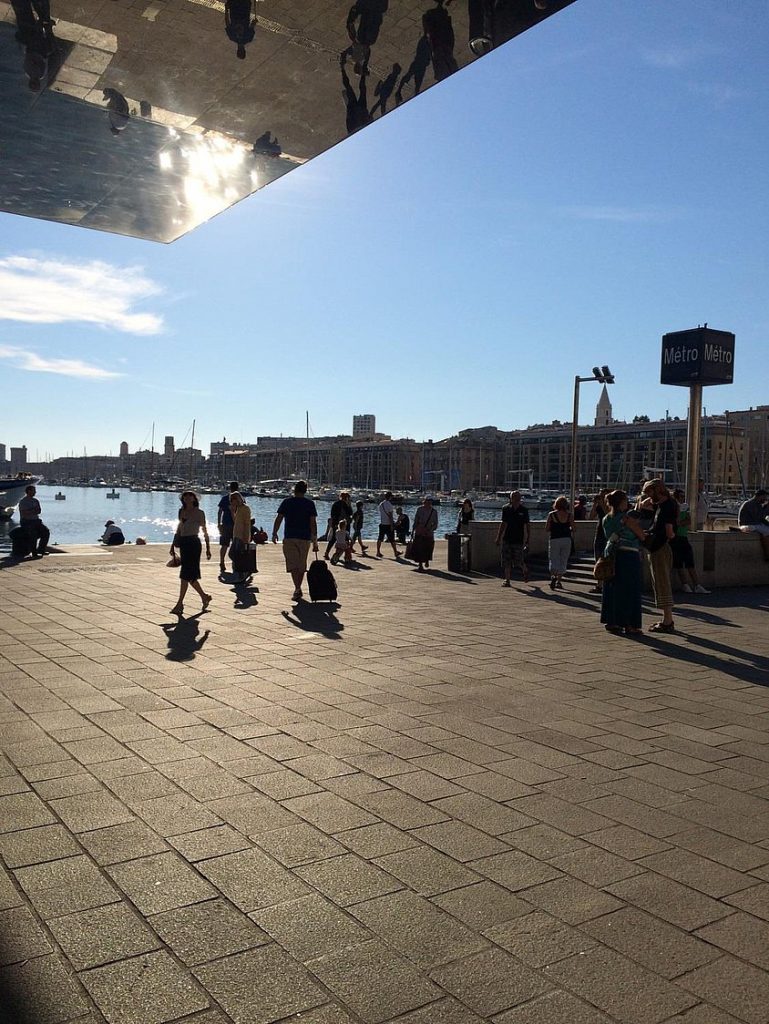 Figure 4. Marseille’s Vieux Port, a central square on the historic harbor, is devoid of benches. Instead, pedestrians sit on steps, the metro station wall, and historic pier pollards © Mary Dellenbaugh 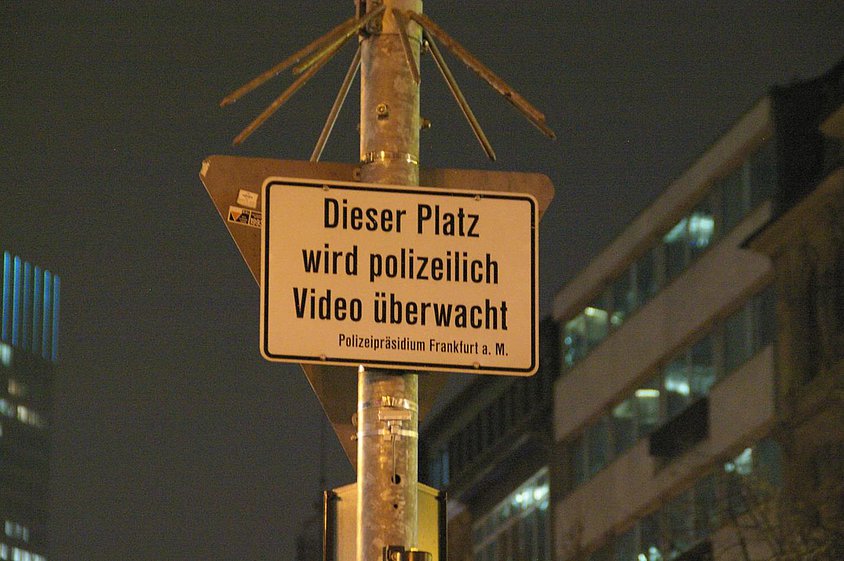 The second option for the top-down provision of street furniture is by third-party contractors who have won the tendering process to provide street furniture for large cities. The revenue for the structures comes in part from the tendering process (public budgets) and in part from advertising. Advertising then becomes such an integral part of public transportation infrastructure and daily street life that it becomes invisible. As the backdrop for everyday life, these structures become banal. However, the process behind the choice of advertising and the structures themselves is often highly opaque. The banalization of these structures creates a tacit acceptance of their messages and presence until only their absence stands out. In the case of advertisement, the very banality of ubiquitous outdoor advertising desensitizes us to advertising – we are saturated with visual stimuli which we then ignore. We are however constantly unconsciously internalizing these norms and messages because the advertising itself has become invisible to us. The provision of street furniture by third-party contractors thus leads to the banalization of ubiquitous advertising and visual pollution in public space, as well as the normalization of the social norms and tropes reflected in the advertising displayed there. It also leads to the provision of street furniture being driven by market forces. 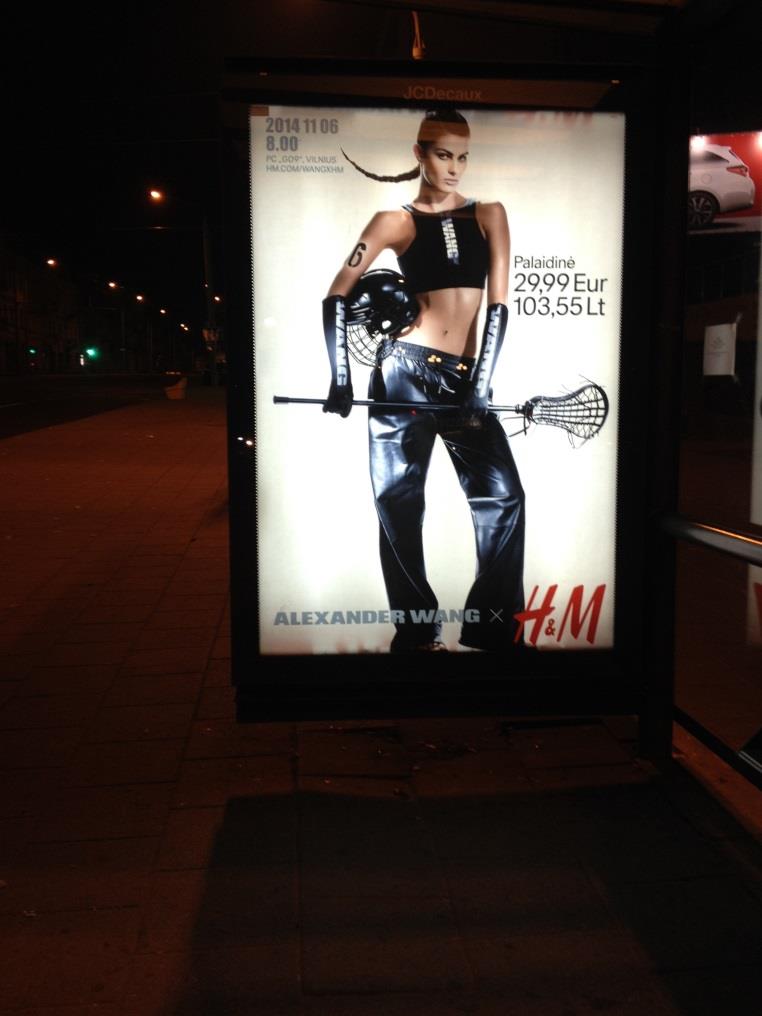 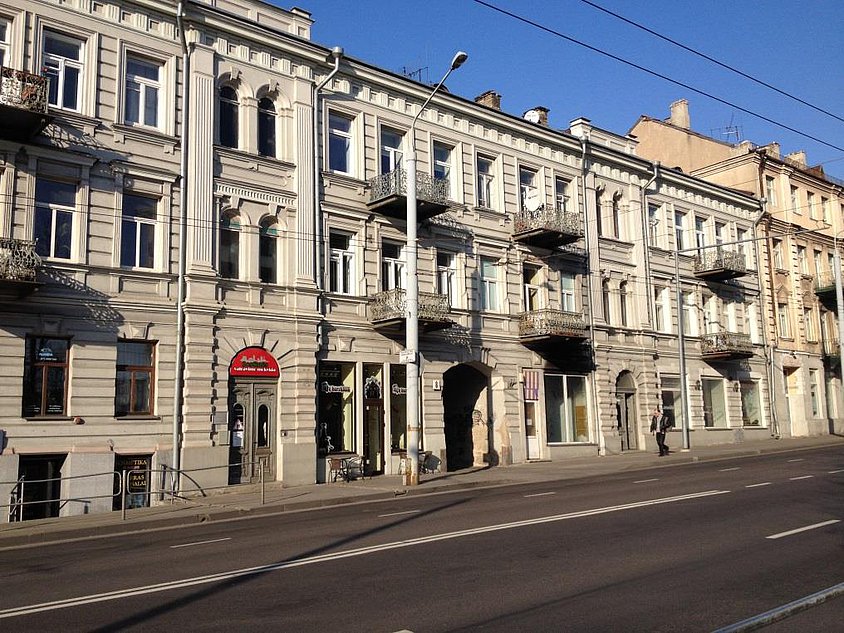 Figure 7. Meanwhile on a less-central side street there is neither advertising nor street furniture © Mary Dellenbaugh 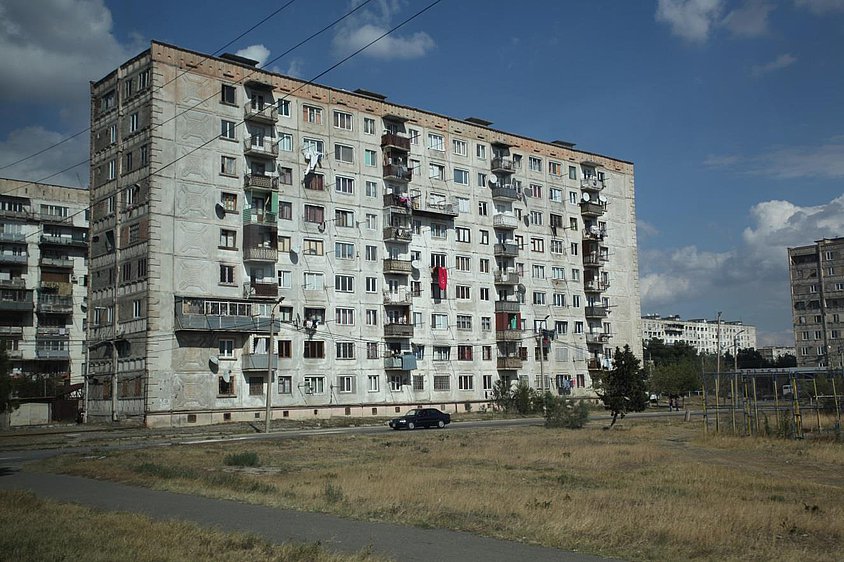 Figure 8. This poverty-stricken worker housing complex outside Tbilisi is also devoid of both advertising and street furniture © Mary Dellenbaugh 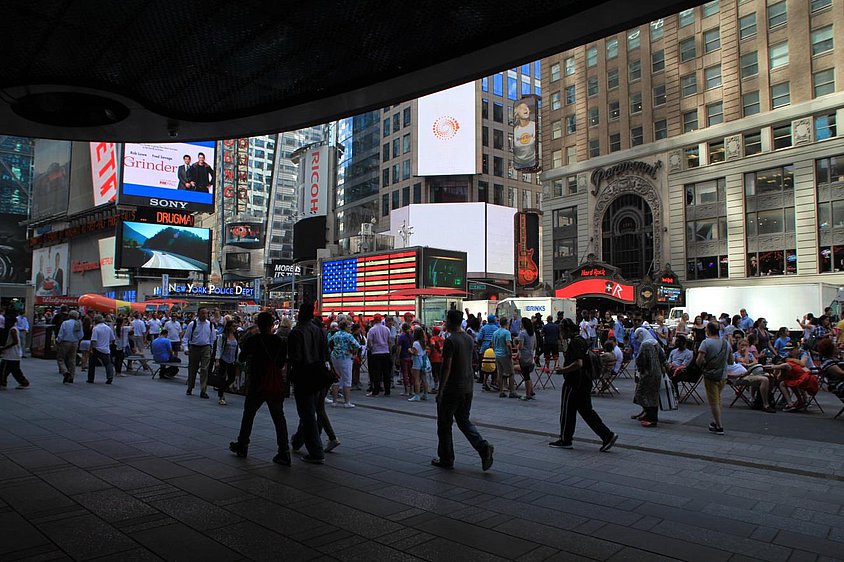 In suburbs and “master-planned” developments (such as Potsdamer Platz), these structures are provided by developers. In suburbs in the United States, developers often cluster houses around ostensibly “public” space, where they create artificial, supply-driven seating areas which feel disconnected from the traditional tenets of centralized urban planning which they are trying to copy. These spaces are usually centrally located in a housing district, with strong visual control from the surrounding houses providing use control.[4] This social control (“self-policing”) is reinforced by self-interest – the immediate removal of negative or undesirable uses (loitering, lying or sleeping on benches, drinking alcohol, etc.) helps preserve the value of the surrounding private property.[5] 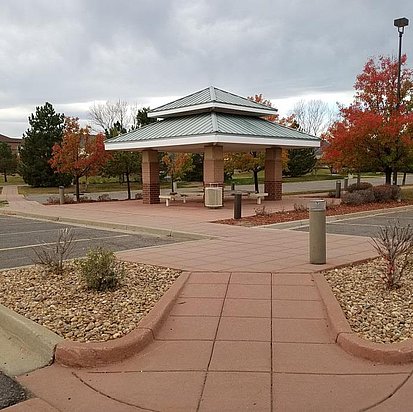 Figure 10. A pavilion in a parking lot outside Boulder provides a place to sit. The question is: for whom?
© PJ Dellenbaugh 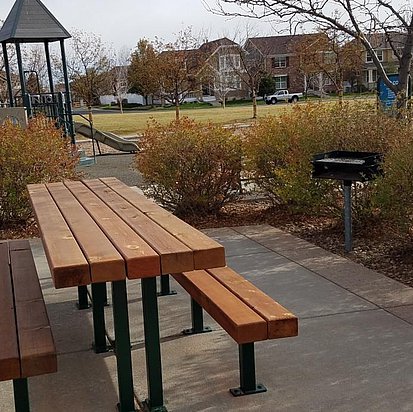 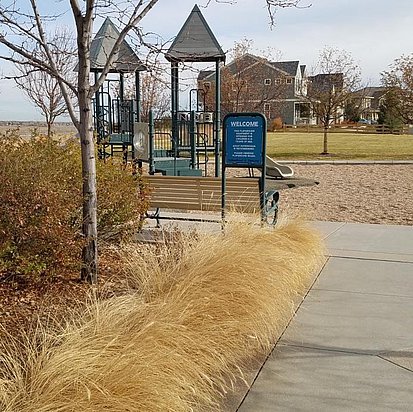 In addition, it’s necessary to mention the increasing tendency towards the privatization of public space. This may be in the form of transforming shopping streets (a public street with privately-owned shops) into shopping arcades or malls (enclosed areas with the structural “feel” of a street, but wholly privately owned and usually outfitted with a security detail). Here again the concept of control and provision by the market plays a decisive role. The provision of street furniture in these spaces serves the other commercial aspects of the space and is highly regulated. 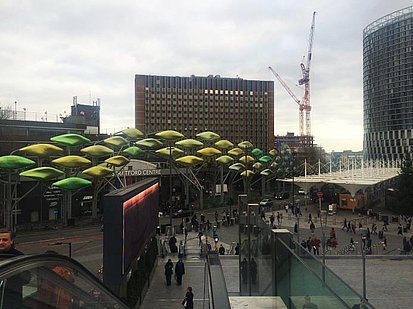 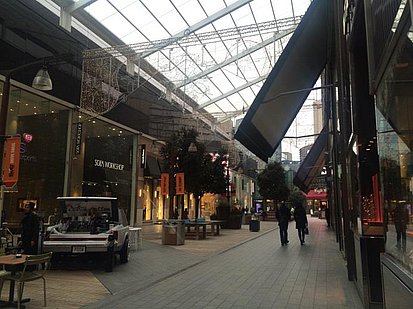 The second normative aspect of street furniture is the design of individual pieces and their arrangement in space. Structures can be movable or fixed (i.e. bolted down), and either designed for a wide range of uses or to discourage particular uses. 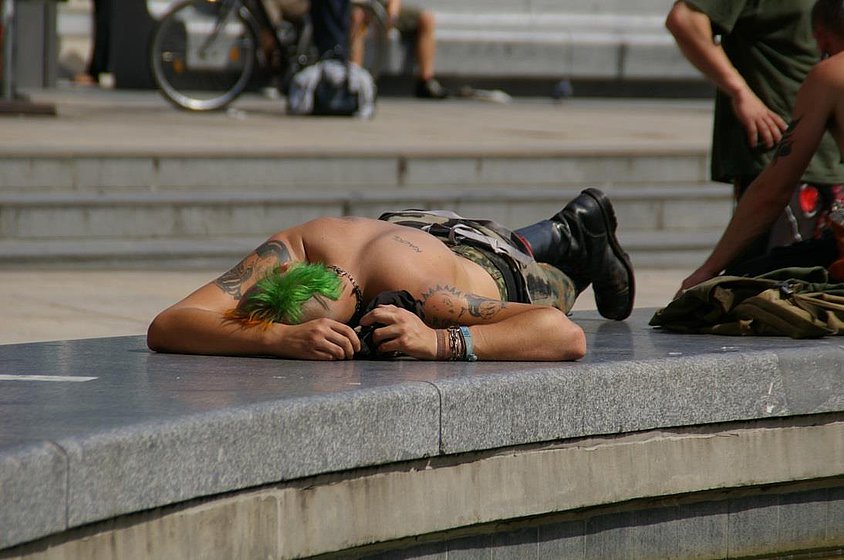 Figure 13. A man sleeps on the lip of the fountain at Alexanderplatz © Mary Dellenbaugh 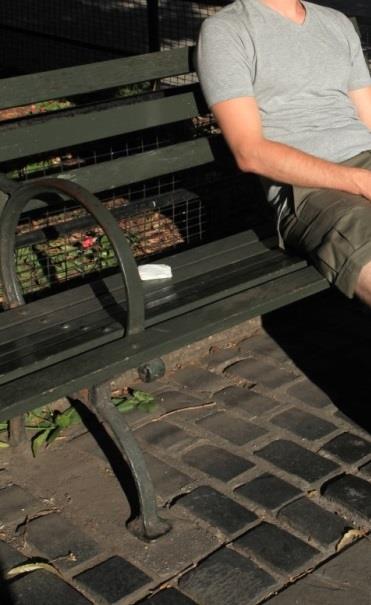 Figure 14. This bench in Stuyvesant Park in NYC has middle rails to prevent uses such as sleeping or lying © Mary Dellenbaugh 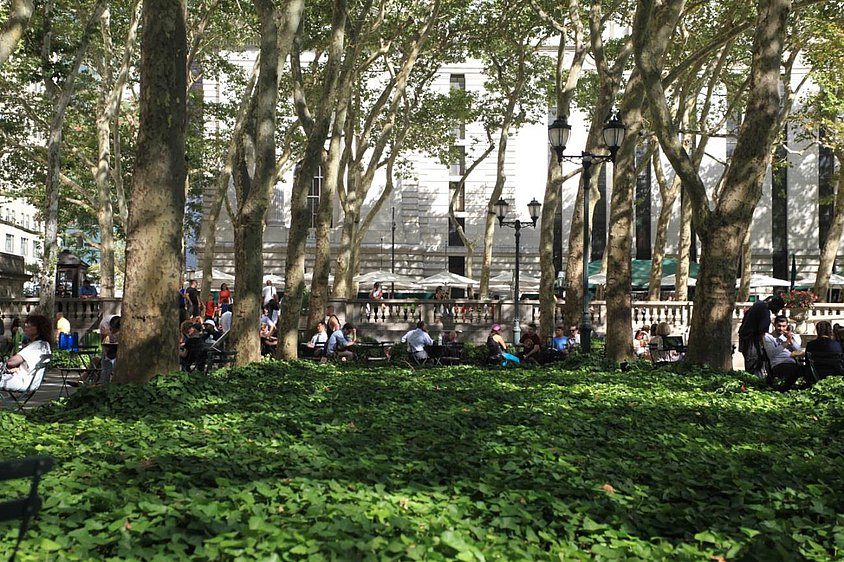 Figure 15. Bryant Park in central New York City is an excellent example of a flexible public space. Chairs and tables can be moved and rearranged to make a wide variety of seating combinations along the tree-lined paths © Mary Dellenbaugh 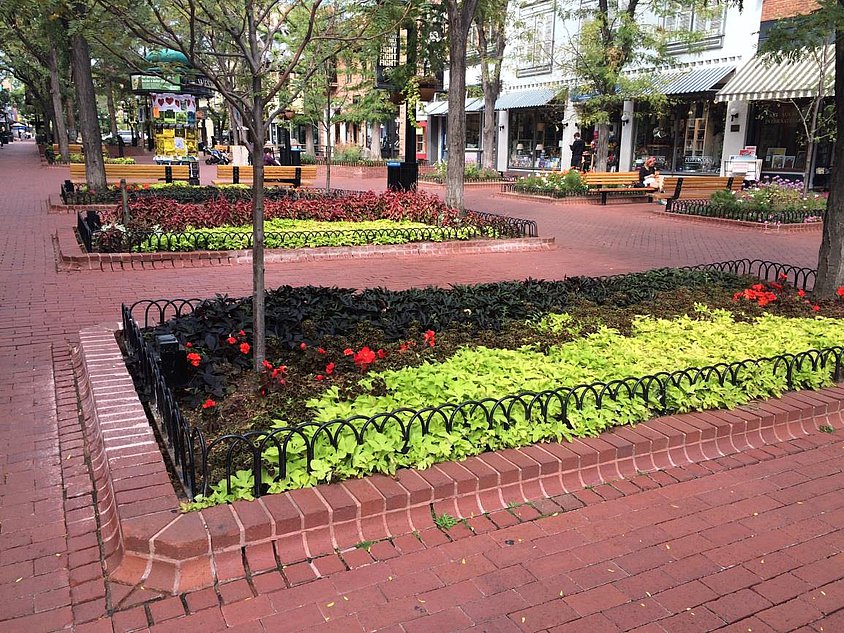 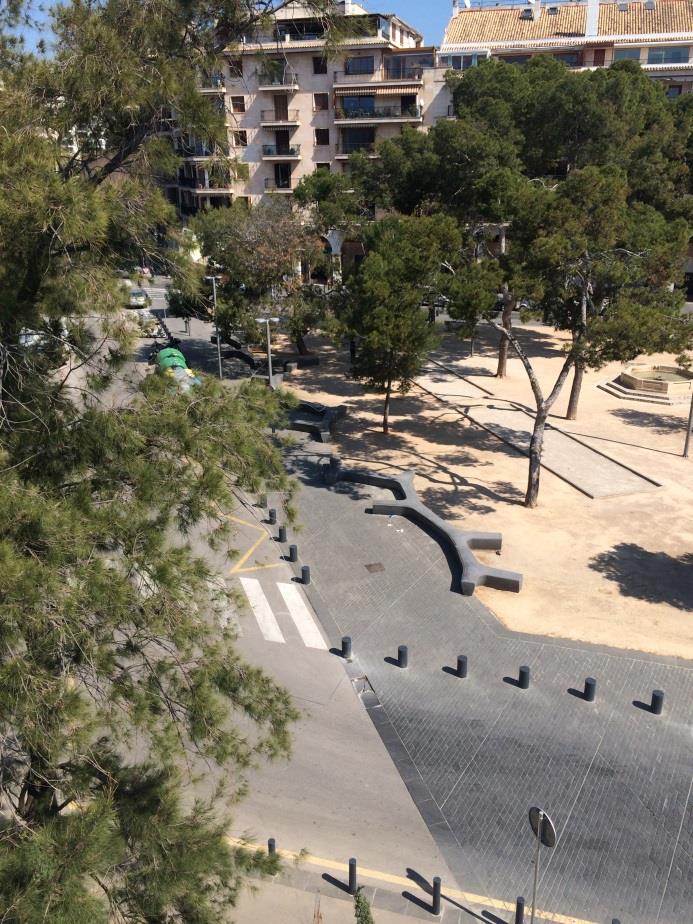 Urban furniture’s design is based on expectations about body types, body measurements and physical ability. Benches, for example, are set up for specific use cases (i.e. seating capacity for three “ideal users”) which have a limited range of body types and shapes in mind. The norming of physical objects in urban public space necessarily includes certain persons and excludes others. Seat areas which ergonomically curve down and backwards can be difficult for people with mobility issues to get out of, or be uncomfortable for persons with longer or shorter legs. Benches with chair-like seats, which curve slightly upwards on both sides to delimit individual users’ places set forth an “ideal” hip width. Street furniture’s design can also include or exclude those with mobility limitations. These physical norms are then reinforced as design elements are repeated throughout the city. 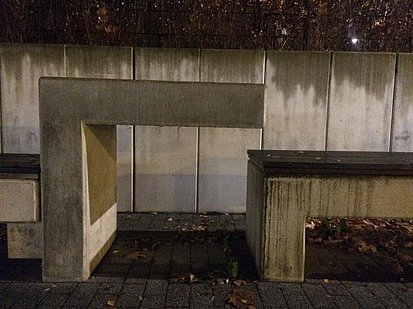 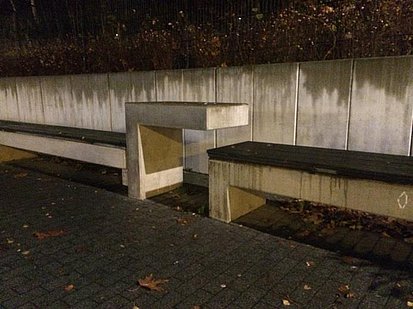 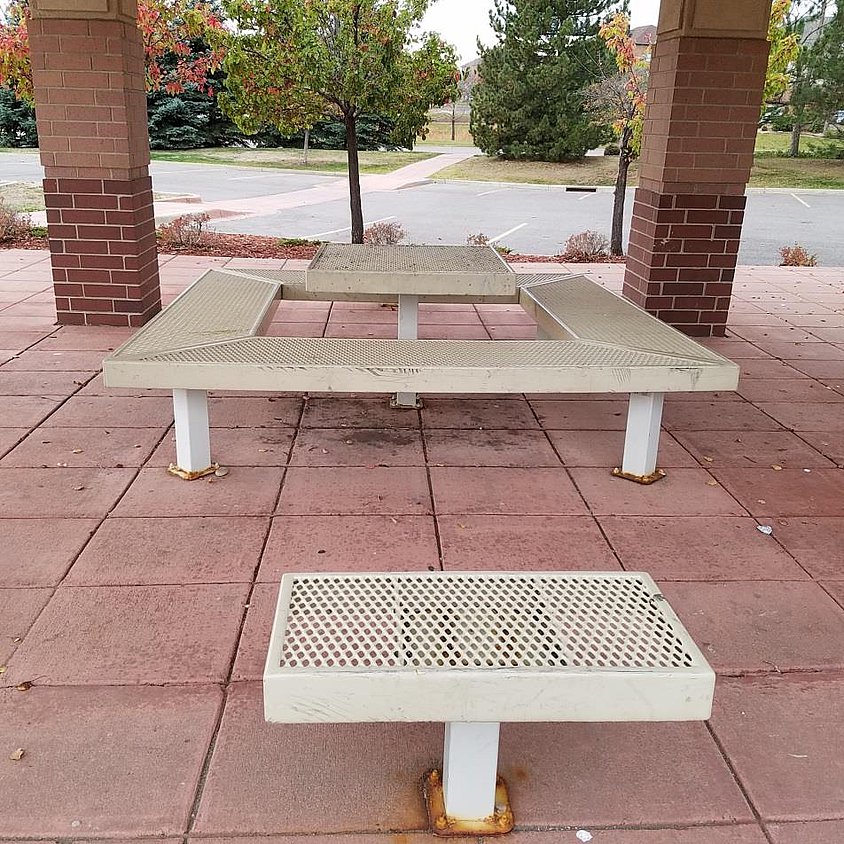 Figure 19. This picnic table in the Boulder suburbs requires one to be able-bodied enough to either step over the bench or swing one’s legs over the bench to sit facing the table, which could be an issue for those with problems in the lower back, hips or legs © PJ Dellenbaugh 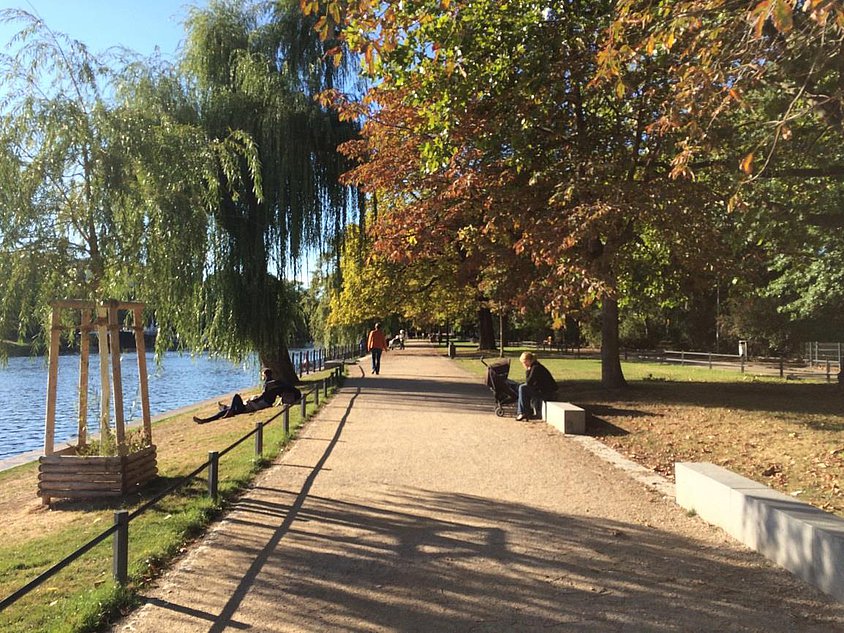 Figure 20. Flexible structures are open to a variety of uses, such as in this example of fixed seating from the Maybachufer in Berlin © Mary Dellenbaugh 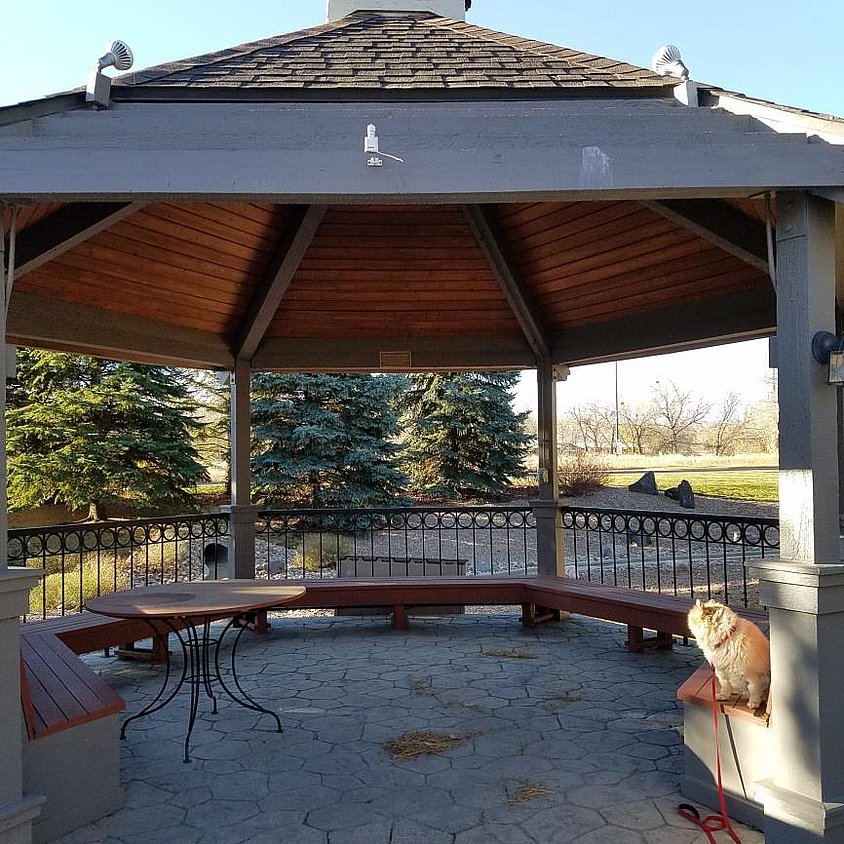 Figure 21. A bistro table has been placed in a gazebo to provide a missing function. Outside Boulder, CO. © PJ Dellenbaugh

Figure 22. Hacking urban furniture. These benches, which are usually arranged in an evenly-spaced row facing the same direction, have been gathered together to make a communicative group. Volkspark Humboldthain, Berlin-Wedding © Mary Dellenbaugh

When street furniture is “imposed” on the urban public, it creates a ubiquitous backdrop for everyday life which enforces official narratives about how and by whom public space is supposed to be used. A critical view to urban street furniture should ask who gets to use, change and adapt public space and to what end(s)? And why is the provision of street furniture supply-driven? What other voices could be involved in the decision process surrounding which structures are built and how? How do designers or planners know if structures are missing or enough?

The coproduction of new use opportunities in public space could be emancipatory,[6] and real-life interventions in Germany could involve groups that are typically not involved or are actively excluded from these processes (i.e. refugees, the homeless, senior citizens). The cooption of the disciplinary aspect of the organization of public space and the power to decide which uses happen in which places can/could be a powerful form of resistance against the disciplinary force of the state and the conforming power of the market. 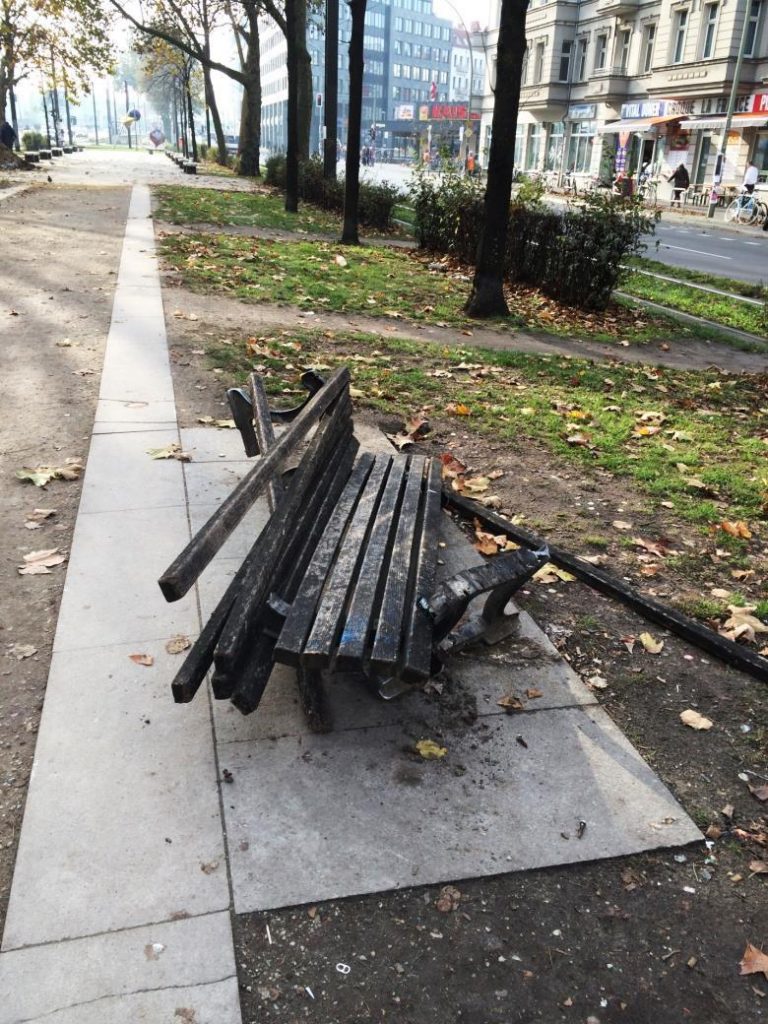 Figure 23. This bench in Warschauer Straße was clearly used in a way that did not conform to its structural form © Mary Dellenbaugh

[3] For example as was the case in New York under Rudy Guiliani, following the “Broken Windows” theory: James Q. Wilson and George L. Kelling, “Broken Windows,” The Atlantic Monthly, 1982, www.manhattan-institute.org/pdf/_atlantic_monthly-broken_windows.pdf.

The essay was originally published on Hacking Urban Furniture website