It has been a while since cultural infrastructures were rethought beyond its institutional setup, including also informal cultural producers and to some extend local communities. This turn, together with growing interests of the authorities for the participation practices, was a starting point in thinking about accessibility as a precondition to shared and later eventually adopted as common. 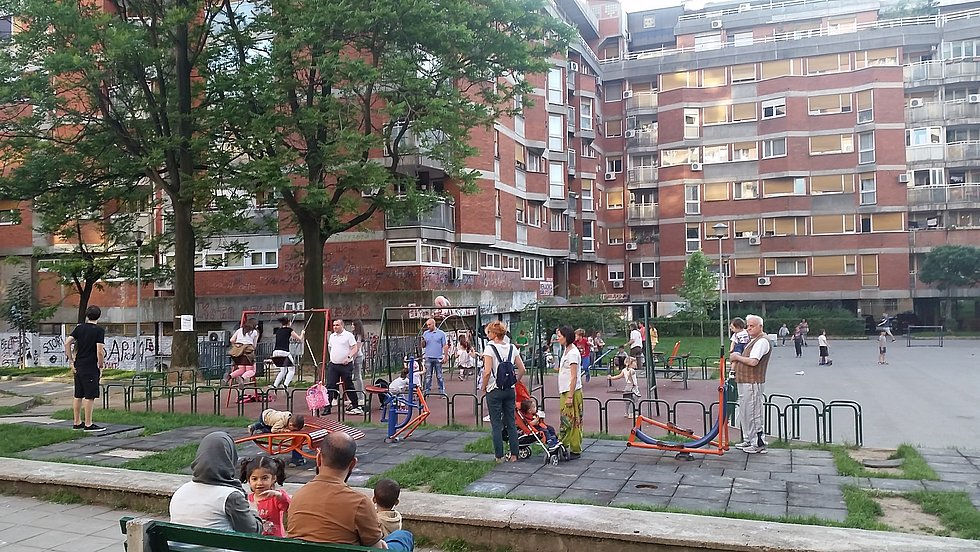 In order to create those places of encounter we propose dealing with spaces with lack of cultural or any public life, but rather surrounded by different (mostly technical) infrastructures. Due to Case Studies we could observe how local communities dealt with ongoing commodification of culture and what were potentials of cultural infrastructures to become places for critical urban pedagogy.

To map spatial potentials and diverse contestations around public space of classical ’70 housing estate (Plato at Milesevska Street), the team of KUNSTrePUBLIK proposed a day-long workshop. City Conflict dealt with fictional conflicts about future development of Plato. Participants were invited to take a position that they are not necessarily in sympathy with (e.g. the greedy investors, the intolerant neighbors, etc.). At the final meeting in the improvised town-hall participants had to defend gathered arguments and provide evidence for the relevance and weight of their claim. This role-game had an aim to shift the perspective of the actors involved, to increase the culture of dialog and constructive argument, and finally to rethink participation beyond ‘wish list’ or alibi for pre-fabricated decisions.

After reflection-rounds with local teams of BINA and Park-Keepers the conclusion was that additional cultural infrastructure was needed, as a supplement to already existing Table developed by the local partner Park-Keepers in 2017. We also agreed that it should take form of the mobile urban furniture, becoming an alternative infrastructure beyond classical beautification of  public spaces (renewed benches and repetitious entertainment tools for kids&seniors).

The collaboration with BINA 2018 expanded into involving in the second Urban Hub at the peripheral district Ledine. Currently we are developing a mobile collective infrastructure (and research tool) with the dual function; both as emitter and receiver of the data/content. Main idea is to develop functionally contradictory tool (e.g. radio-pop-corn-machine that collects outdated stories) that will allow diverse users to become ‘cultural producers’ and address specific local problem or challenge. We are planning to use logic of ‘formats’ i.e to develop infrastructure for repetitive micro-events, which could potentially gather specific community and produce strong images for media. 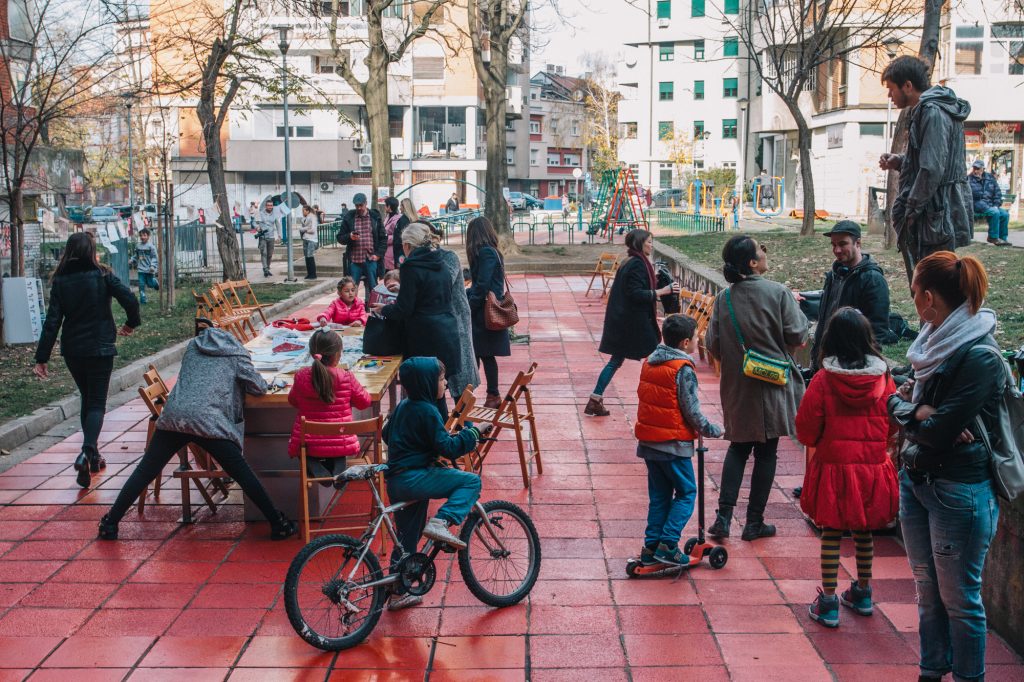 Collectively developed Table as a place of gathering, discussion and production © Park Keepers 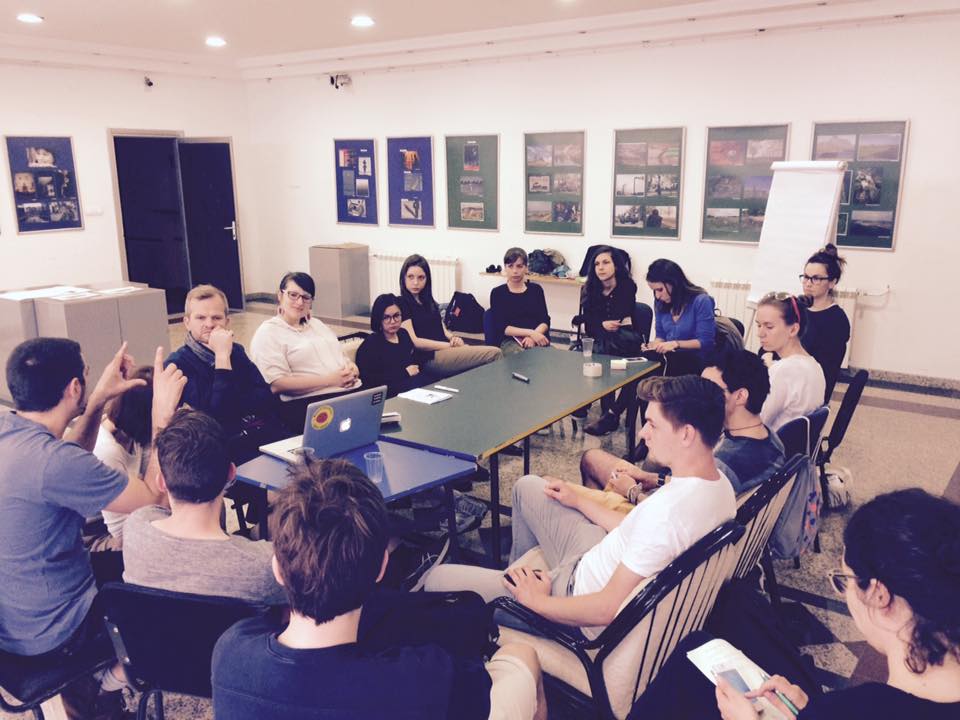 Our intervention in Prague during the reSITE 2017 dealt with an idea of turning a short distance public boat HolKa* into the space for cultural production. We collectively developed a fictive campaign, claiming for further operation of the public line in danger. Participants and random boat users developed complete reprogramming of a 5-7min boat experience, allowing scenarios such as therapy/confession boat, dating platform or pecha-kucha learning format. By rethinking the time we spend on public transportation and behaviors ‘smart-technologies’ are creating (majority of the people staring at the phone), we raised important questions of interaction and meditation/relaxation as a part of public transportation. 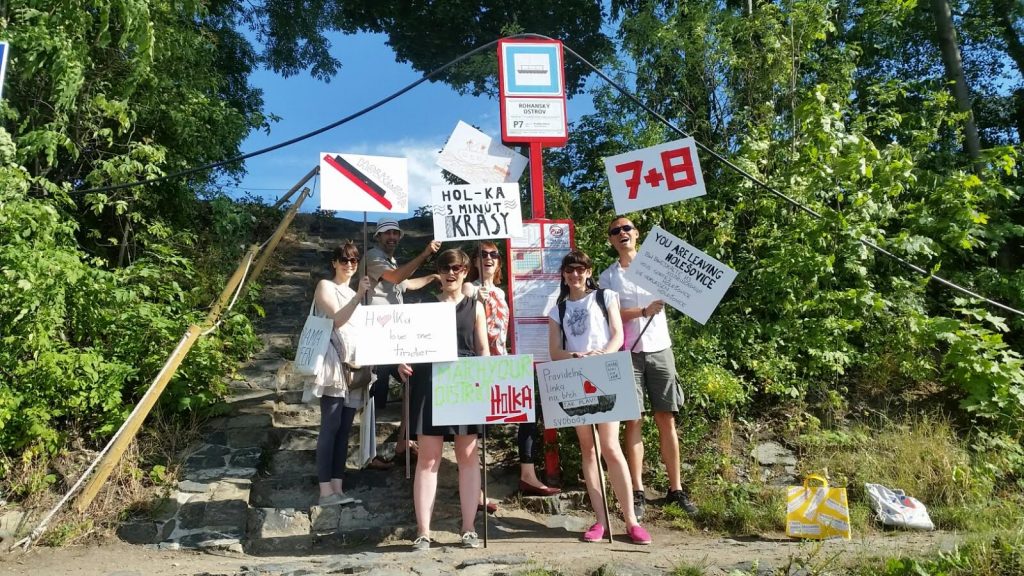 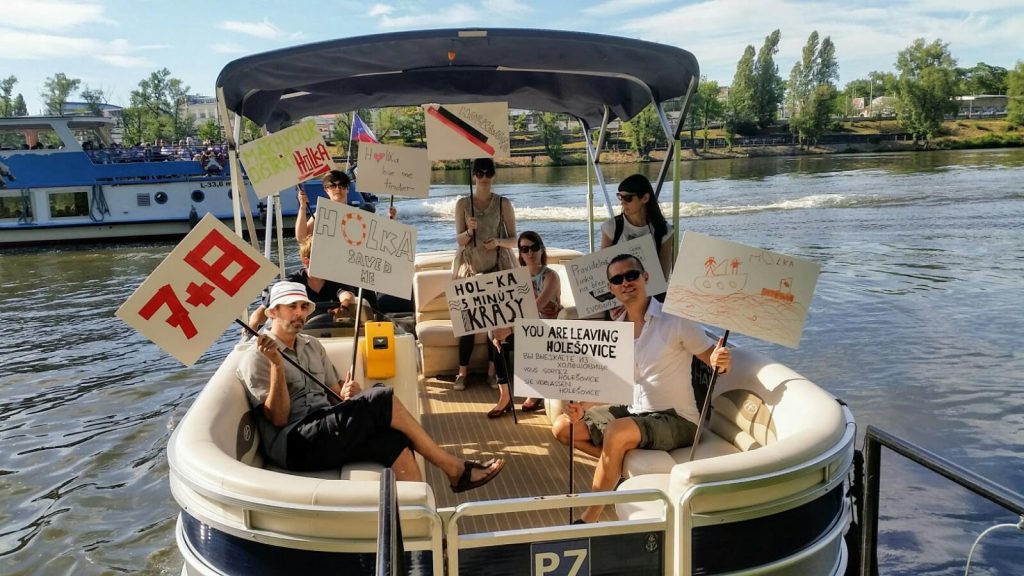 Both in Prague and Belgrade we found culture of participation being rather imposed then naturally developed. This for sure has to deal with historical factors and experiences, often leading to skeptical view on current political developments, driven by investor-centred urbanism. What we found interesting in Prague was a growing scene of local non-partisan political movements, resulting in winning election in some districts (particularly in the one where the boat is, note of the editor, Prague 7), which allowed innovative projects to happen, even as pilot studies. For the Belgrade case, those grass-root urban politics are rather exception with more space for constant improvisation and personal contacts. What we found surprising in Belgrade was more spontaneous and non-regulated ways of using the public space, a wider pallet of grey zones, dissimilar from the Central European Cities. However, persistent work of self-organised groups such as Park Keepers is crucial in order to raise awareness of commons at least at the level of immediate surroundings. These personal efforts sometimes lead to avalanche-effect and we are hoping that Urban Hubs could trigger some collaborative projects with local authorities beyond pure maintenance of dilapidating public sphere.