What were the main features and biggest challenges for Katowice? How did the use of field data help address some of these problems during the four years of the Shared Cities project? Find the answer in the interview with Karol Piekarski from Katowice Miasto Ogrodów, Poland. 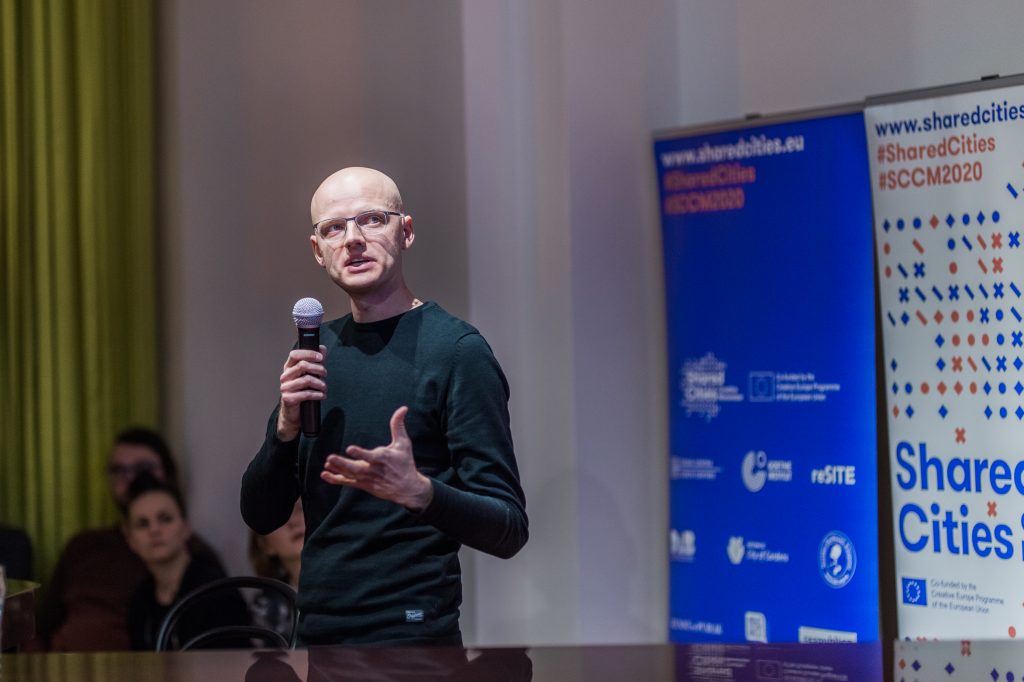 “One of the major challenges throughout the research process was how to bridge the gap between different urban actors – activists with researchers, NGO representatives, and city officials. In order to bring them together we’ve organised several dozens of workshops, hackathons, and public meetings, which has allowed us to get diverse feedback.”

Let’s look at Katowice back in the summer of 2016 when you and Medialab got involved in the Shared Cities project – what were the city‘s main features and its biggest challenges?

Only a few years ago, no one would have thought of Katowice becoming a city associated with culture. In 2015, however, following a brief yet intensive period of investment in cultural infrastructure and cultural events, Katowice joined the exclusive network of UNESCO Creative Cities. Has the city undergone a true cultural revolution? Is this just a passing fad or could it be a herald of major changes in the city centre? Can culture help overcome some of the challenges our city is still facing – depopulation, urban sprawl, or depleted public spaces? These were some of the questions we wanted to answer.

Were you able to address some of these problems during the four years of the Shared Cities project?

Yes, we sure did. What struck us the most was the correlation between distance to the city centre and participation in cultural life – the pattern that we found during our research. By analysing data from several sources, we’ve discovered that people from wealthier, middle-class areas are not necessarily the most frequent event goers. Using the API (programming interface) of Google navigation tool to study travel times to 14 cultural institutions from all address points in the city, we have found areas with difficult access to events. We are also able to suggest who should switch from car to public transport to reach the city centre faster. In the end, who is willing to waste an hour to get to the cinema or a concert? This is just one example of what we’ve been working on.

You and your Medialab colleagues have conducted extensive research using field data from the Katowice region. Are some of your findings applicable to other European cities?

Of course, we are trying to promote data-driven cultural studies by sharing our ideas, recipes and computer code that we used to analyse the data. Everything we produce is available on open licences. By using widely available online tools or data resources, one could make similar research on transport accessibility or cultural trends in any other European city. We try to encourage social scientists and cultural researchers to reach out to data science in order to upgrade their research kits so they could use more data-driven approaches – e.g. machine learning or exploratory data visualisation – in their own studies.

One of your research questions was whether cultural events bring life to the city centre. What did you find out?

Without a doubt, all data indicate that event goers are very likely to spend time and money in the city centre. The more devoted they are to culture, the more often they do sights, visit pubs and restaurants, go shopping, or just hang around in public spaces. Since those were the activities that we had lacked in the somewhat deserted city centre, the new trend is highly desirable. Even though in many other big cities cultural industry has been blamed for gentrification of neighbourhoods, so far it’s has not been the case in Katowice.

When it comes to cultural events, what role do big festivals play in changing the perception of a city?

It has played a significant role, although the perception itself was not in the scope of our research, which focus on more tangible issues. Some sceptics claimed, for example, that even though fans flock to Katowice to see their favourite stars, they don’t bother to walk to the city centre from a bit more distant festival locations. In fact, it’s just the opposite! Attendees of high-profile events are more likely to spend time and money in the city than regular participants. They take advantage of other cultural events, visit restaurants, do shopping and sightseeing, or use hotel accommodation. This seems a natural trend, as large events attract people who are more willing than residents of surrounding cities to enjoy the opportunity to get to know Katowice. 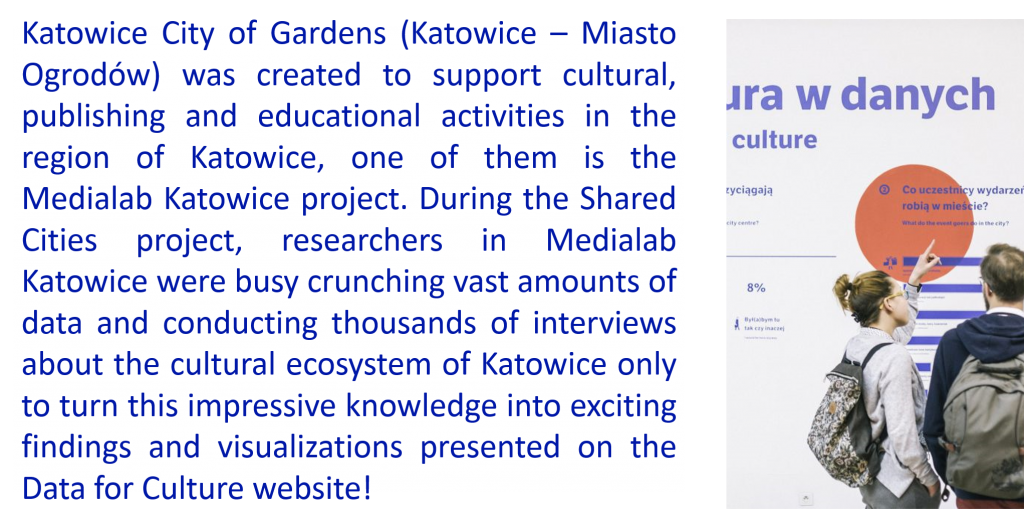 Much of your research data comes from social media. What does Facebook reveal about managing events?

Most of the organisers of cultural events are trying to figure out how to reach out to new audiences. Where do you go to find new public for your activities? Since conducting city-wide surveys would be a difficult and costly task, it seems quite sensible to make use of existing data from social media. By studying declarations of Facebook users, marking themselves as interested in or going to particular events, we were able to find links between their organisers. If two selected events, and thus also their organisers, share a large number of Facebook users, it means they are positively correlated (or the other way round – the audience of one event avoids the other). We have also created a tool to help organisers analyse their performance on social media, e.g. what time of a day to publish posts to get more interaction from fans.

How would you describe the way the Medialab team works?

Our project team consists of people with different competences and academic backgrounds – social scientists, urban researchers, graphic designers, code developers and data scientists. We try to apply design thinking principles and rapid prototyping, we publish collected data on open licences and present the results through carefully designed data visualisations. One of the major challenges throughout the research process was how to bridge the gap between different urban actors – activists with researchers, NGO representatives, and city officials. In order to bring them together we’ve organised several dozens of workshops, hackathons, and public meetings, which has allowed us to get diverse feedback.

Who uses your research findings? Katowice’s city hall? Cultural institutions in the city?

Our study is still becoming more and more popular, especially among other cultural institutions which would like to get know-how and reuse our tools, e.g. recently we helped out a neighbouring city of Sosnowiec to set up a research project in the major city theatre. But most importantly, our team has just kicked off another huge, city-wide research project as a follow up on the previous study, this time to investigate audiences of smaller community centres located in Katowice’s districts. We have also been invited to several other Polish and European cities (e.g. Dublin, Košice, Prague) to present our findings. However, it’s a bit more difficult to gauge the real influence of our study on the decision-making process of Katowice’s institutions, since they don’t usually reveal it publicly. 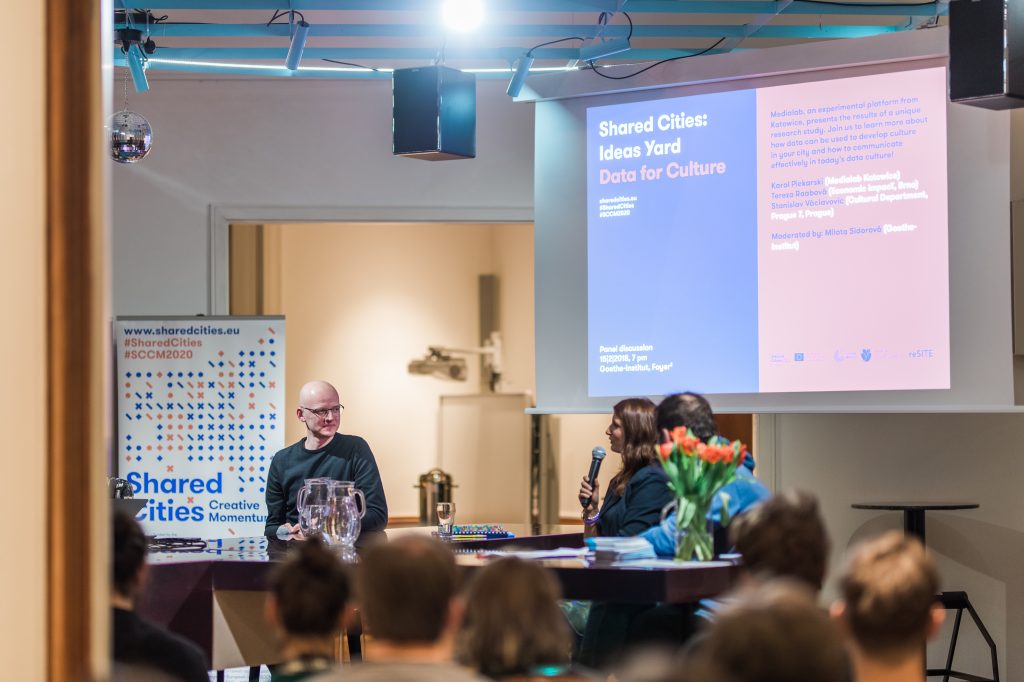 During the Data for Culture presentation at Goethe Institut Prague in February 2018. ©Pavlina Jachimova